Node-RED 0.16 is now available to download or npm install.

As announced with the 0.15 release, 0.16 will not be made available via the standard Raspberry Pi Jessie repositories. See below for more information on how to update your Pi to this version.

Also announced with the last release, we no longer support Node.JS 0.10 or 0.12.

Neither of these versions are supported by the Node project anymore and continuing support for them was already preventing us from picking up important fixes in other dependencies.

If you are running the preinstalled version on a Raspberry Pi, you should follow the instuctions here for upgrading your version of node.js.

As we announced in the previous release, we’ve removed the Serial node from the default set of nodes.

If you are using the Serial node, you will need to manually reinstall the node after upgrading.

There are two fundamental actions in Node-RED - adding a node and wiring it to another node.

One of the challenges can sometimes be finding the node you want in the palette. That can cause lots of scrolling - particularly if you’ve installed lots of nodes.

We’ve added a new ‘quick add’ mode for nodes. If you ctrl-click (cmd-click) in the workspace, the new quick-add dropdown will appear. It provides a mini version of your palette right under the cursor that can be filtered to find exactly the node you are looking for. When you click on the node it then appears on your workspace.

The dropdown lists five common core nodes at the top, then the five most recently added nodes and then all of the nodes in alphabetical order.

We’ve been using this for a while now and found it to really speed up creating flows. You don’t have to keep moving your focus over to the palette as you go.

Another challenge is when you’ve placed a bunch of nodes in the workspace and want to wire them all together; lots of click-dragging needed.

Alongside the quick add mode for nodes, we’ve done something similar for wires.

If you hold down ctrl (cmd) when you click on a node’s port to start wiring, you can then let go of the mouse button and simply click on each node you want to have wired together and then release ctrl.

As both modes are trigged by holding the ctrl key down when clicking, you can easily combine them.

The Debug sidebar has had an overhaul to make it much more useful. Previously it would display the message content as raw text. That was fine for simple text or numeric values, but as soon as you sent an Object or Array it was hard to see the details in the blob of text it displayed.

The new sidebar provides a much more structured view of the messages. If you are familiar with the JavaScript console in your browser, you’ll be familiar with what you can do here.

There are a number of extra features hidden in there. For example, any numeric type can be clicked on to toggle between decimal and hexadecimal. If it looks like a date expressed in milliseconds since epoch, another click will show the formatted date.

Another example is if you receive a Buffer object that actually contains text data:

You can also now pop the debug sidebar out into its own window by clicking the screen icon in the bottom right corner. That lets you give your debug messages as much room as they need. 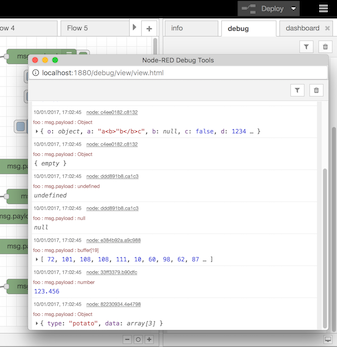 If you have any other suggestions for making the debug panel even more useful, do let us know.

We introduced a warning in the last release for when you are about to overwrite changes on the runtime. We knew the warning would be of limited use - it doesn’t help you do anything about it.

This release now lets you compare the flows on the server with the changes you’ve made locally. You can then merge those changes together, resolving any conflicts along the way. 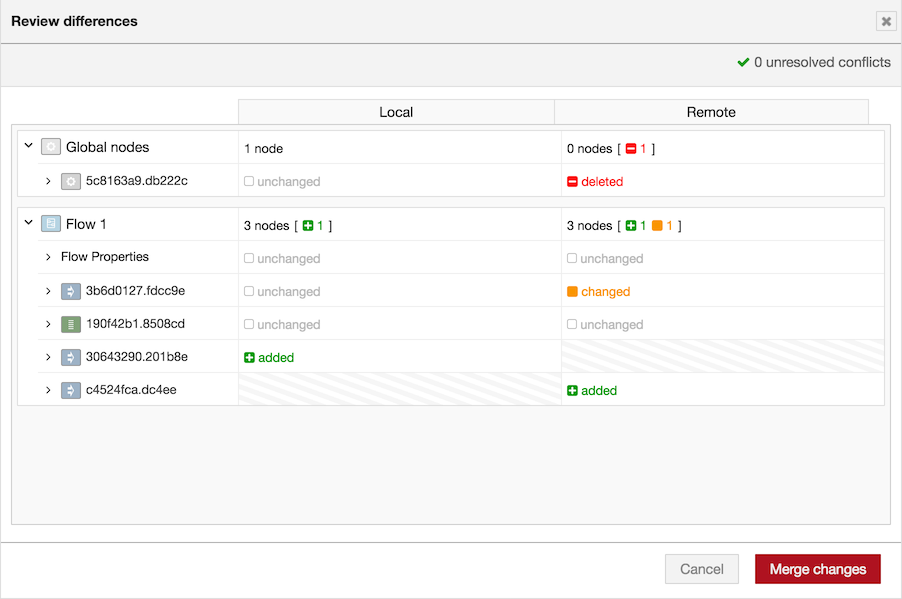 The list also shows you other defined actions that don’t currently have a shortcut assigned; this work is a precursor to allowing you to customise the shortcuts in a future release.

We’ve added a warning to the editor that notifies you if your flows are currently stopped due to missing node types. This was a cause of confusion for users who didn’t watch their runtime logs.

JSONata is a lightweight query and transformation language for working with JSON documents, developed by some colleagues of ours at IBM.

We’ve added support for it in the Change and Switch nodes. This means many simple tasks are now possible without resorting to the Function node.

For example, a Change node that converts msg.payload from Fahrenheit to Celsius:

To help you write JSONata expressions, you can open up an expression editor by clicking the button to the right of the field. This provides auto-complete and inline help for the full JSONata language.

For more information about JSONata, head over to their website and use their exerciser to try it out.