Node-RED 0.17 is now available to download or npm install.

This release has been a while in the making, but comes to you with plenty of useful new features. There are over 300 commits across the code base, with a record 20 different contributors.

Building on the improvements we made last time around with the Debug sidebar, we’ve continued to make it even more useful.

When you hover over any element of a debug message, you get a mini-toolbar that gives you some actions to take. The first button will copy the path to that message element to your clipboard. For example, in the screenshot above, it will copy payload["First Name"]. This can then be pasted anywhere you might need to reference that element, such as in a Change node.

The second button will copy the value of that element - again, in this example, you’d get Fred. If the element is an Object or Array, you’ll get the JSON encoded version.

The third button lets you ‘pin’ this message element. When another message arrives from the same Debug node, it will be automatically expanded to reveal all pinned elements.

The filtering options have also been expanded. As well as the existing options to filter based on which flow you are looking at, you can filter the view to show particular nodes. 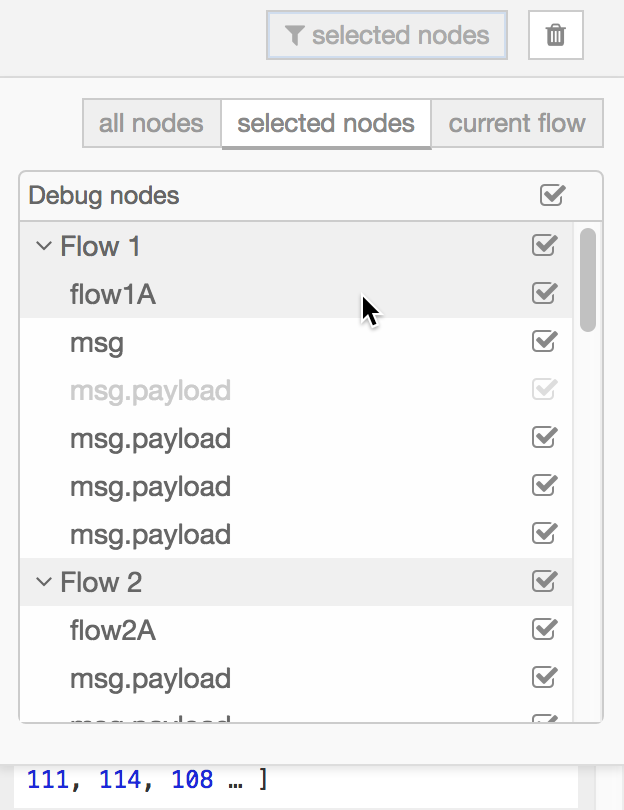 All node ports can now have tooltips that appear when your mouse hovers over them. A node can define its own labels as part of its definition or a user can specify custom labels. For example, the Switch node will automatically create labels that tell you what rule applies to each output.

The node editor has a new ‘port labels’ section where you can provide your own labels for any node.

The information sidebar has had a general tidy up and we’ve introduced a style guide for node help text. Having a more standard structure for the information a node provides will make it easier for users to understand how to use any particular node.

If you have published your own nodes, we strongly encourage you to update them to follow the style guide.

The typedInput common widget we provide has been extended to support more types and to make it easier to work with some of the existing types.

We’ve added a Buffer type so you can work with node.js Buffer objects. You can enter the value as a JSON array of bytes, such as [1,2,3,4], and the runtime will convert that to the corresponding Buffer object.

The single-line of the typedInput is not well suited for working with long pieces of content, such as JSON or longer JSONata expressions. For these types, and the new Buffer type, we’ve added the ability to expand the typedInput into a larger editor to give you more room by clicking the button on the right of the input. 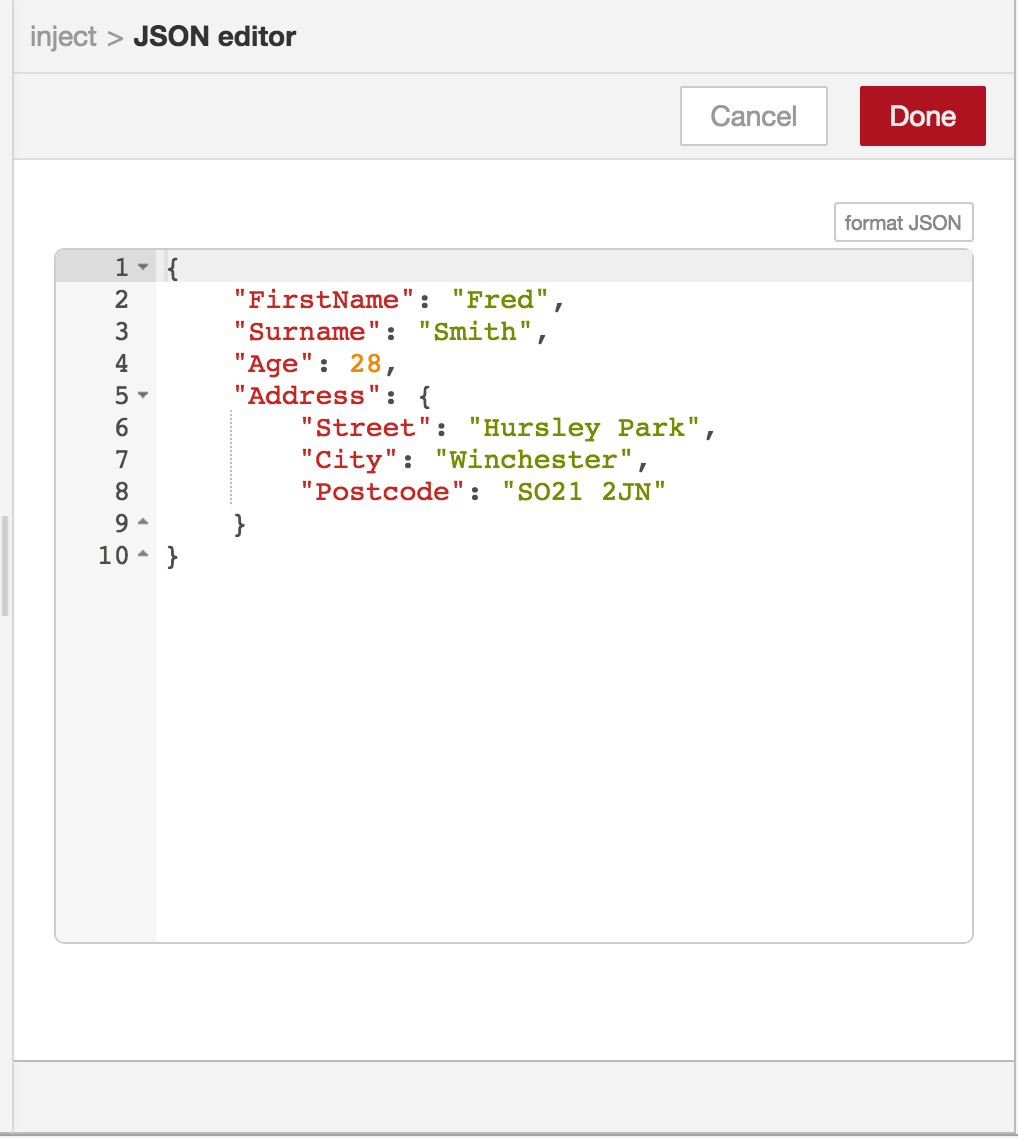 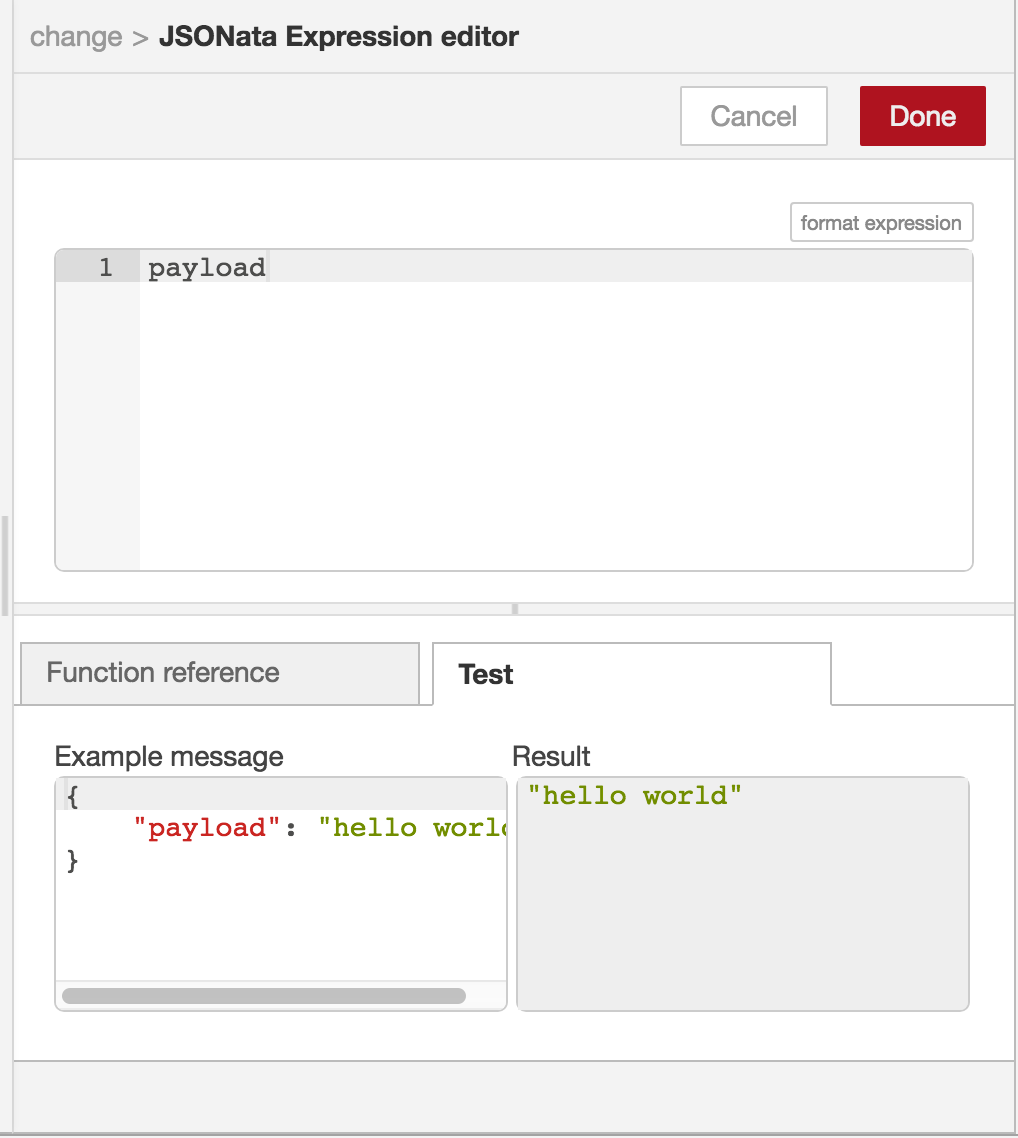 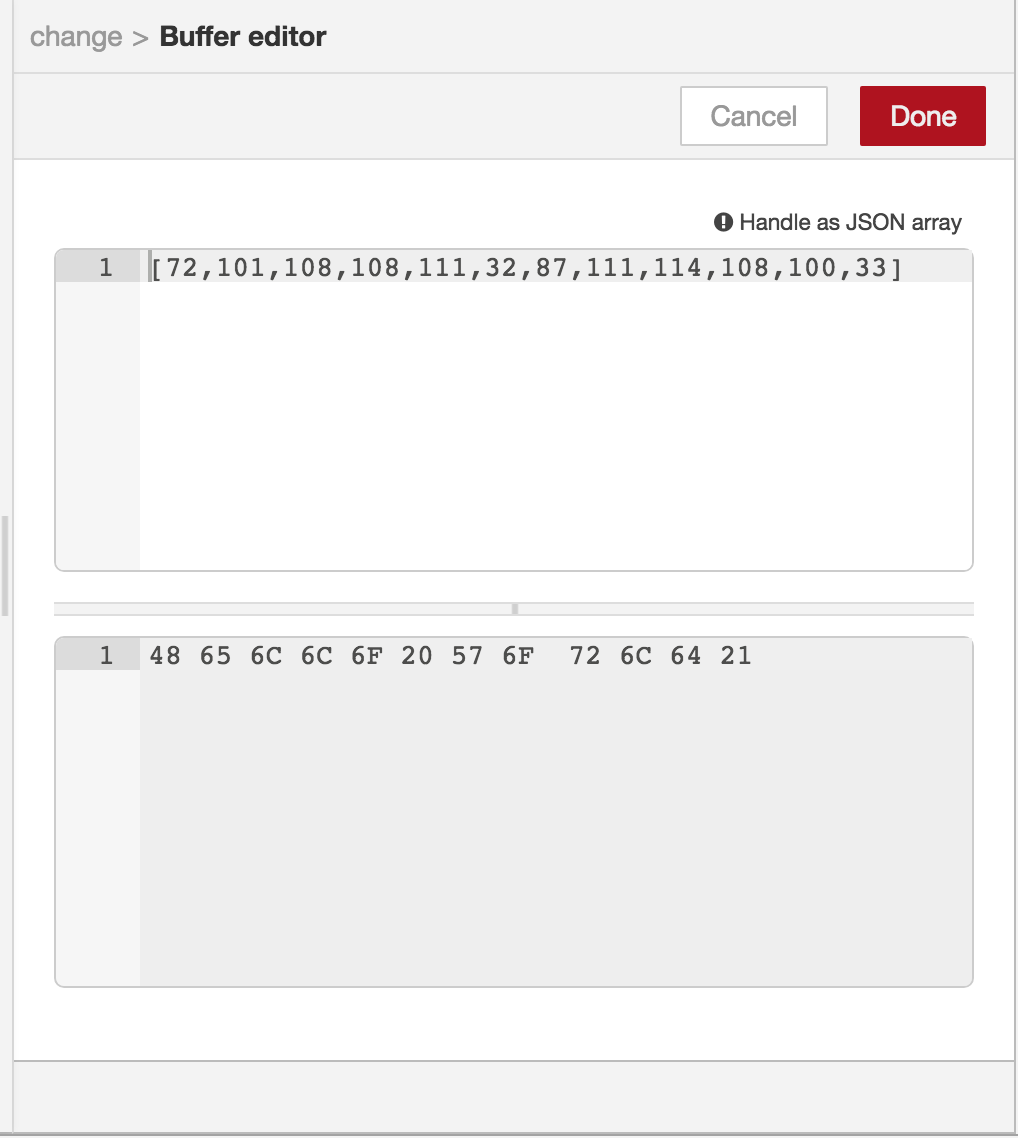 The JSONata editor provides a tab to test your expression within the editor. You can paste in an example message (which, as described above, you can now copy straight out of the Debug sidebar) and see the results of the expression. It also includes a complete function reference for the JSONata language.

Whilst we’re talking about JSONata, we’ve also updated to the latest version (1.2.6) which brings a lot of new functions, including $flowContext and $globalContext that can be used to retrieve values from context within your expression. We’ve also made it so you no longer have to use the msg. prefix in the expression - so where you previously would have used msg.payload you should now just use payload. Existing expressions will continue to work - but we recommend updating them.

The Buffer editor lets you enter a JSON array and will display the data in hexadecimal below. If you enter invalid JSON, it will treat it as raw UTF-8 data and convert it to its Buffer representation.

We’ve introduced a new settings panel within the editor to bring together all the options you have available for customising the editor.

This is where you’ll now find some the options that were previously under the ‘view’ menu, such as the grid options. It’s also where you’ll find the list of keyboard shortcuts - including the ability to customise any of the shortcuts to your own taste. Please note that these options are stored within the browser - so if you access the editor from a different browser, it won’t have them saved.

With the new settings panel in place, the Palette Manager view has also been moved over.

The nodes view has been updated to highlight any nodes that have updates available and to let you kick off the install. It also warns you that you must manually restart Node-RED in order to complete the update.

I mentioned previously that we’ve added a style guide for the node help. Most of the core nodes have been updated to use the guide.

Some of the nodes have had minor updates to their edit dialogs to improve their usability - particular around the parser nodes (JSON, HTML, CSV etc)

The Split node has been updated to provide more options on how it should approach splitting different message types. For example, Arrays can now be split to sub-arrays of fixed length, rather than individual elements and it can also now handle Buffer payloads.

A new ‘streaming’ mode has been added which can be used to realign a stream of messages to ensure each one is a ‘complete’ message. For example, if a data source is sending data packets separated by a newline character, but it isn’t able to ensure the packets align to individual messages, you may receive two messages containing:

Note that the packet containing three has been split across two messages. In streaming mode, the Split node would be able to convert that to a stream containing:

The HTTP nodes have had a few useful updates.

The HTTP In node now supports file uploads. It must be enabled in the node (and is not enabled by default). When enabled, any files included in a request are provided under the msg.req.files object. Note that the file content is included in the message, rather than written to a temporary file.

The HTTP Response node now lets you hardcode a response status code and http headers within the node as an alternative to setting them manually on each message.

The HTTP Request node now has better cookie handling - making it easier to set cookies on requests and receive the cookies set in the response. Note that the node automatically follows http redirects and will only return cookies set on the final request it makes in a redirect sequence. For some login apis this means you cannot easily access the cookies made earlier in the sequence. This is a signifiant limitation of the node that we want to address - but to do so will involve a considerable change to its internals. Rather than rush that into this release we’ve decided to defer it to the next release so we can spend the time needed to ensure nothing breaks along the way.

Finally, we’ve made it easier to chain HTTP Request nodes together. There has been harder than it should have been up until now. The Request node sends the headers it receives as msg.headers. It also uses msg.headers to set the headers of the request it makes. This meant that give a sequence of two Request nodes, the headers returned by the first would modify the request made by the second. This was rarely the right thing to do and could cause various side effects. The work around has been to explicitly delete msg.headers between the nodes - something you had to just know. With this release, we now detect when the headers from one request node are being passed to another and, unless they have been purposefully modified in some way, the second node will now ignore them.

As ever, there is a collection of smaller updates to other nodes.

If a node logs an error and provides a message object, it can trigger any Catch nodes in the flow. That mechanism has been in place for a while now.

In most programming languages, if you catch an error it is up to you to log it if it needs logging. We’ve made our behaviour to be consistent with that approach, so now we will only log errors that do not get caught by a Catch node.

We’ve extended the authentication mechanisms supported by the editor to include many of those provided by Passport. More specifically, this means you can now use OAuth and OpenID identity provides to secure your editor.

We’ve published examples for both Twitter and GitHub to get you started.

Note: we have not yet updated the node-red-admin tool to also support these authentication schemes.

The context object has a new function, context.keys() that returns an array of all keys stored in context. This exists for the node’s own context and the flow and global context objects.

When new flows are deployed, all nodes are first stopped (or closed) before being restarted. The close event handler a node can register can now receive a boolean flag to tell the node if it is being removed rather than just restarted.

The call to close the node will now also timeout after 15 seconds. This will prevent a misbehaving node from hanging the whole runtime. Note: a hang is considered to be a bug with the node and any such instance should be raised as an issue against the node. The 15 second timeout can be changed using the nodeCloseTimeout property in your settings file.