With the 1.1.0 release done, our attention turns to the next release. But before we push ahead with the next item on the backlog, it’s a good moment to think about the bigger picture

We reached our 1.0 milestone last October. This was a major point for us to reach and it took quite a while to get there. And it has taken us 9 months to get to the the next release. That delay was not ideal as it has meant many new features have been sat around for months, waiting to be released.

This is an unfortunate result of being an open-source project that cannot take for granted anyone’s involvement. Whilst I am in a fortunate position to be able to dedicate a very large part of my day job working on the project, that is not the case for many of the other contributors.

Our approach to scheduling releases has been fairly relaxed. We haven’t set target dates too far in advance and at some point we would decide we have ‘enough’ new content to warrant publishing a new release.

Prior to the 1.0 release, we would also, on occasion, make a change that shouldn’t be made in a minor-version number release. For example, dropping support for older versions of Node. You can just about get away with that when you are a 0.x versioned project, but now we are a 1.x versioned project, we need to take more care.

As it stands, we still technically support running on Node.js 8.x - even though that version of Node stopped being maintained at the start of this year. And we certainly have an eye on the fact that Node 10.x drops out of maintenance at the end of April next year.

Whilst we certainly wouldn’t recommend it, we understand some users are stuck on older versions, and we don’t want to needlessly break them if we can avoid it.

But nor can we continually hold ourselves back from being able to make use of new Node.js features in the core runtime.

We also recognise that for the companies who have adopted Node-RED into their own commercial solutions, they need a degree of confidence in how long any particular version of Node-RED will be supported.

So with all of that in mind, here is the current proposal for how we manage releases in the future. 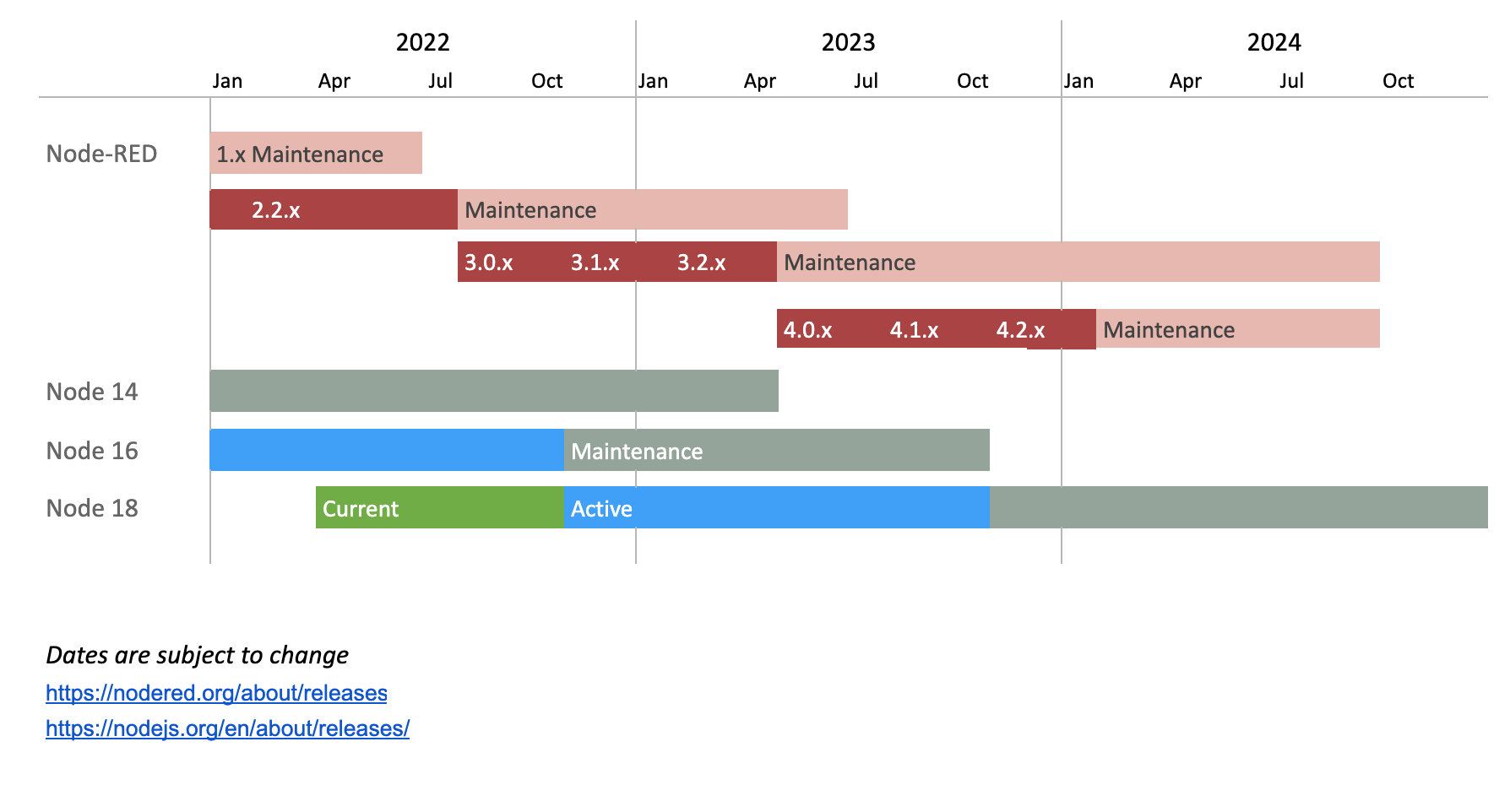 At the bottom, the chart shows the published dates for the current Node.js releases. If you are using Node.js in any sort of production environment, you need to be aware of these dates.

The top shows the proposed release schedule for Node-RED.

The 1.x stream will then enter maintenance mode. It will only receive bug fixes and security updates. New features could get back-ported from 2.x if there was a very good reason to do so as well as people available to do the work.

The 2.x stream will continue in active development with a minor release every three months or so until April 2022 when Node 12.x reaches its end-of-life. We then publish Node-RED 3.x and the cycle continues. The 1.x stream will reach its end-of-life soon after the 3.x release. The exact timing of that will be something we will need to discuss further.

It is important to remember this plan is not risk-free. It assumes that the project has enough contributors to help deliver it. This becomes particularly important when we have multiple streams to maintain.

We’re hopeful that having a published schedule of releases will help encourage people to contribute, whether in code, documentation, testing or just general feedback.

We will see how it goes over the next few months - we have until April before we will have multiple active streams. If something isn’t working and we have to rethink this plan, then we will.

I’ve added a summary of this plan to the About section of the site for future reference.