Node-RED 1.3 is now available to install. If upgrading, please read the upgrade instructions.

Please note this is the last release that will run on Node 8 or 10.

Next month we will be releasing Node-RED 2.0 that drops support for those versions of Node as they have reached end-of-life.

Release video coming soon - subscribe to the channel so you don’t miss it!

Function node use of npm modules

We’ve made it much easier for a Function node to use extra npm modules.

By setting functionExternalModules to true in your settings file, you will then be able to configure your function nodes with a list of additional modules it will use. The runtime will automatically try to install those modules when you deploy the flow.

Unlike the functionGlobalContext approach, where your Function node would have to retrieve the module from global context before using it, the modules loaded by this new feature are automatically required and defined in your code.

The edit dialog has a new setup tab where the number of node outputs and the list of modules used by the node can be configured. (If you haven’t enabled the functionExternalModules setting, you’ll only see the Outputs field).

You’ll see we’ve relabelled the other tabs to try to make it clearer when the code in those tabs is run. 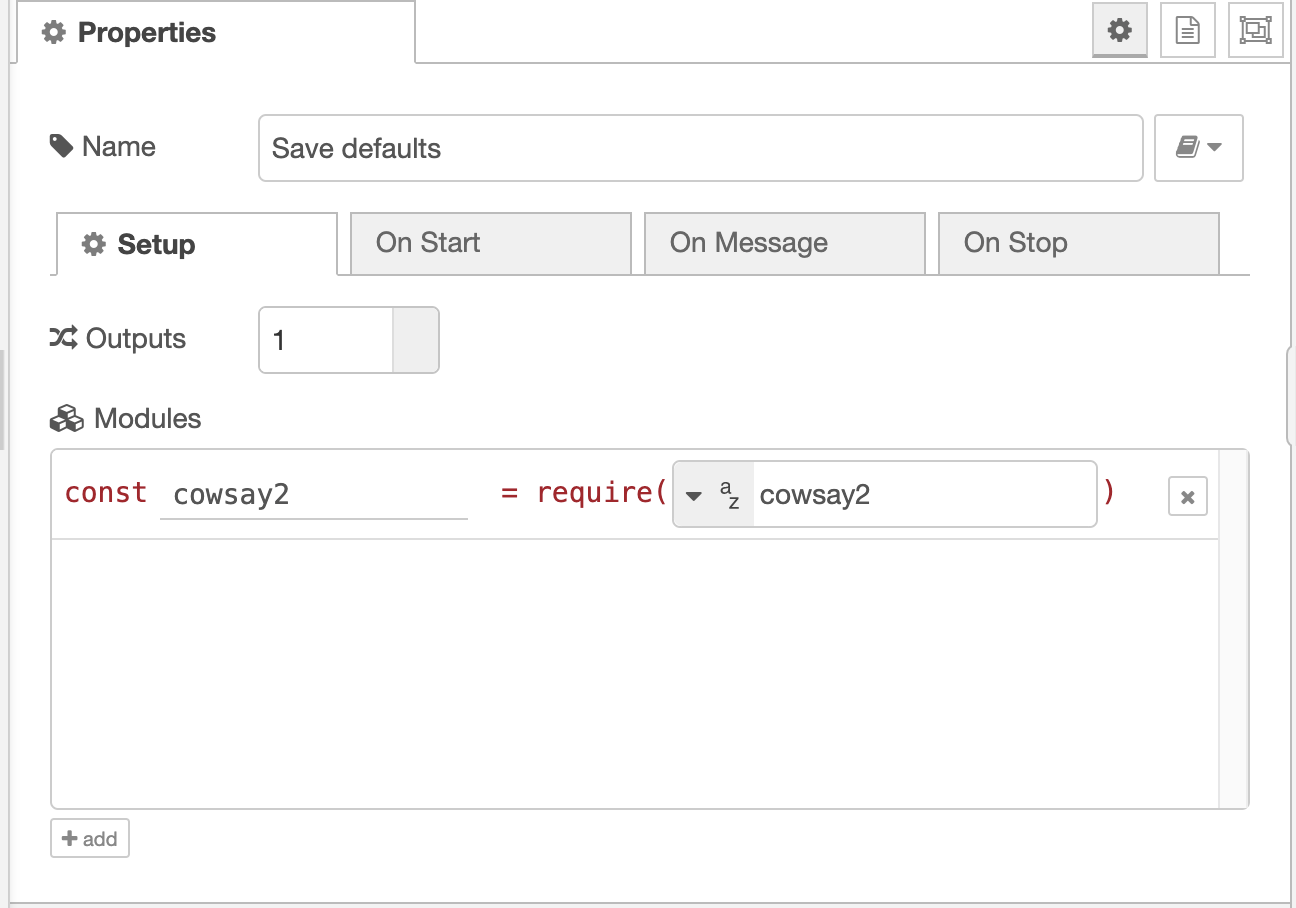 It is now possible to nest references to message properties in the Change and Switch nodes.

For example, if you are receiving temperatures from a number of sensors. Each message has msg.topic set to the room the sensor is in and msg.payload is the value. You want to store the current temperature of each room in context under flow.rooms - for example flow.rooms.kitchen and flow.rooms.garage.

To do this with the Change node in previous versions of Node-RED required the use of JSONata. For example:

More likely, users would fall back to a Function node - something it would be nice to avoid.

With 1.3, it is now possible to configure the Change node as:

In fact, any node that uses the RED.util.getMessageProperty(...) utility under the covers will gain this functionality.

We’ve introduced a new plugin framework for Node-RED to make it easier to customise and add new features. Its very early days for this feature - but will form the basis for lots of new things in the future. By delivering extra function via plugins rather than core code, it keeps the core smaller and makes it easier for applications that embed Node-RED to be more selective over what ‘extra’ features then want.

Taking advantage of this new framework, there are two new types of plugin available today:

A common requirement for both plugins and Nodes is to be able to load additional resources into the editor. This could be images in the help text, or extra JavaScript libraries.

Previously this has required lots of additional work by the Node to make those resources available to be loaded.

With the plugins framework we’ve made this easier to do - and this applies to Nodes as well as plugins.

Now, if a module has a folder called resources at the top level, the runtime will automatically make its contents available to be loaded over the Admin HTTP api.

The node/plugin is still responsible for doing the loading of that content in the editor, but now they don’t need to create the routes to do in the runtime.

The Creating Nodes documentation has been updated with more details.

It is now possible to package a subflow as a module and publish it to npm to be installed in the palette just like any other node.

As part of this, the subflow property edit dialog has a new ‘module properties’ tab where you can set optional meta-data about the subflow that can be used when generating an npm module.

The process for generating the module is currently entirely manual. We’ve added a section to the Creating Nodes guide that details the process.

The Export dialog now shows a structured list of what you are exporting. The raw JSON can still be seen on a second tab in the dialog. This should help users understand what they are exporting. 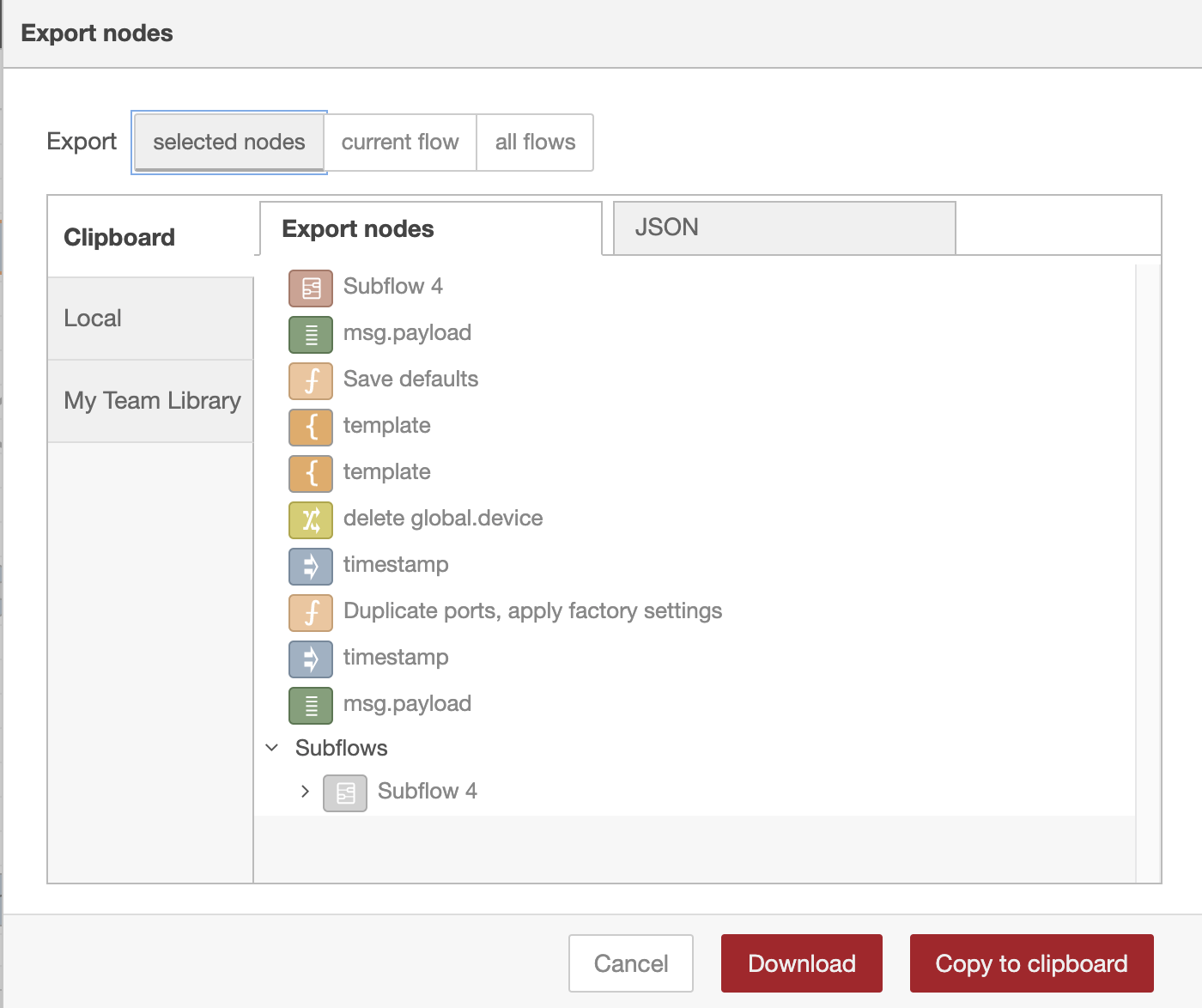 If you shift-click on a node, we would already automatically select all of the nodes in its flow.

Previously, to open up a subflow you’d first have to double-click on an instance of it in your workspace, then click the ‘Edit subflow template’ button in the edit dialog that appears.

With this release, if you press Ctrl (or Cmd on Mac) when you double-click on the node, it will take you straight to the subflow template tab. Similarly, if the subflow instance is selected, holding Ctrl (or Cmd) when you press the Enter key will do the same thing.

Navigating around the workspace.

We’ve added some keyboard shortcuts to help navigating around the workspace.

It is now possible to set custom keyboard shortcuts via the editorTheme option in the settings file. This means you can more easily copy your customisations between instances. More details

There is a new setting available that governs what can be installed into Node-RED - externalModules.

This covers two separate things - what new nodes can be installed via the palette manager, and what modules can be loaded by the Function node.

Under this setting, you can provide allow and deny lists that are used to determine what modules can be loaded by the runtime. These lists are also used by the editor to filter the list of nodes the palette manager shows.

This new setting replaces some existing settings which are now deprecated.