Node-RED 2.0 is now available to install. If upgrading, please read the upgrade instructions.

The main focus of this release has been dropping support for old versions of Node.js that are themselves no longer supported. This in turn has allowed us to make some major dependency updates internally. This has required time and effort to do properly. As such, there are not a lot of big new features in this release - but there are certainly plenty of useful things to play with.

We’re also releasing the first versions of the Node-RED Flow Debugger and Linter. These are optional plugins that really step up the developer experience within the Node-RED editor. Before we get to them, lets look at what’s new in the Node-RED core.

We’ve added a new command-line option to node-red to help you generate a settings file.

It asks you a series of questions about how you want to configure your Node-RED environment, such as setting up user security.

This makes it much easier to get started with a well configured, secure Node-RED environment.

You can run it using the node-red admin command:

Along with the new node-red admin init command, we’ve reorganised the default settings file. The settings are now in a better order, with clearer sections to help users navigate.

You can see the new default settings file here.

We’ve updated the default settings file to hardcode the flow file name to flows.json. Previously we left it unset, so the runtime would use the hostname to generate the flow file name. That would catch people out when moving between networks. As this is a change to the default settings file, all existing installs will continue to behave as they did before.

We now have optional support for the Monaco text editor. This gives a much richer code editing experience in the Function node and elsewhere.

For now, Node-RED will still use the ACE editor by default. To enable Monaco you need to edit the editorTheme section of your settings file to include a codeEditor section like this:

We tested this editor against a lot of the more commonly used nodes to ensure they work with Monaco, but it is possible there are contrib nodes out there that assume the editor uses ACE. If you hit any problems, please let us know so we can raise with the module owner. 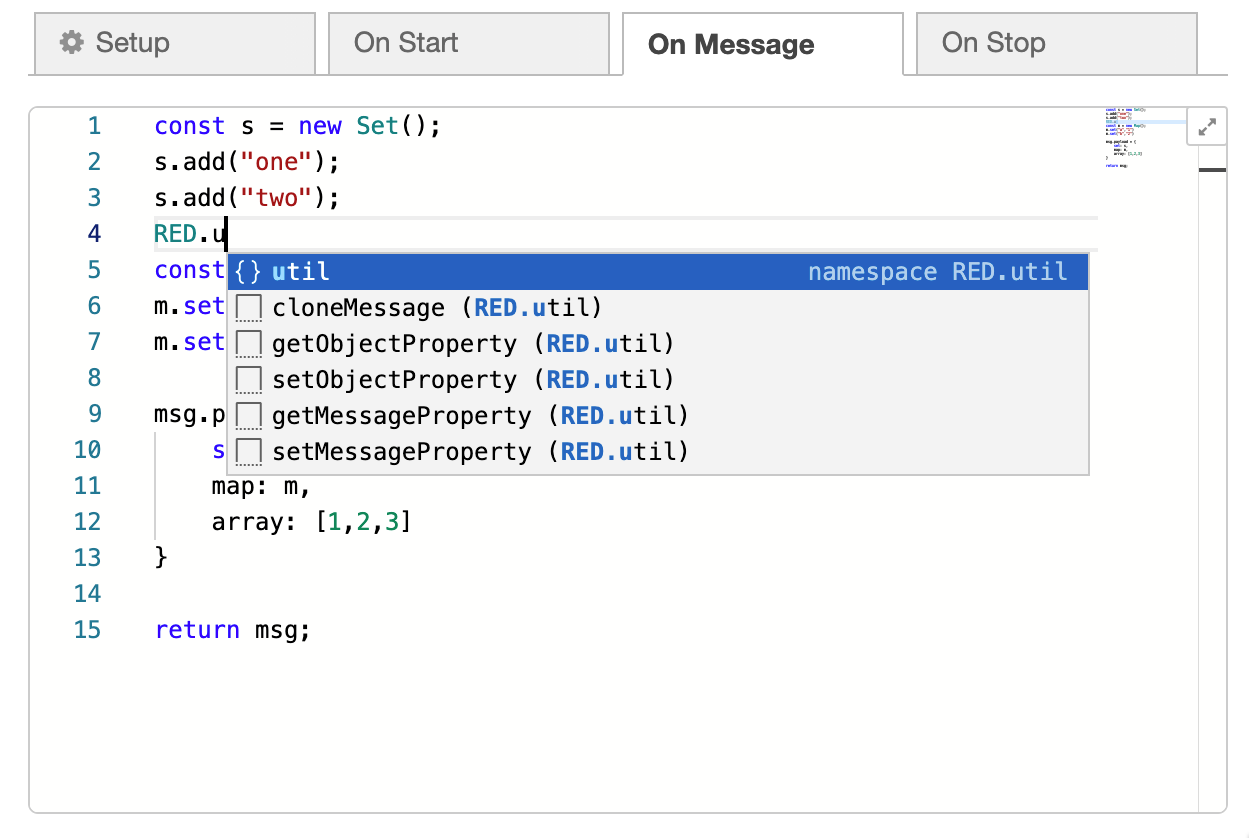 To make it easier for nodes/plugins to style their UI elements so they honour any custom theme applied, we’ve added a selection of CSS Variables they can use to pick-up theme colours.

Based on feedback on the feature we’ve made the following changes in this release: 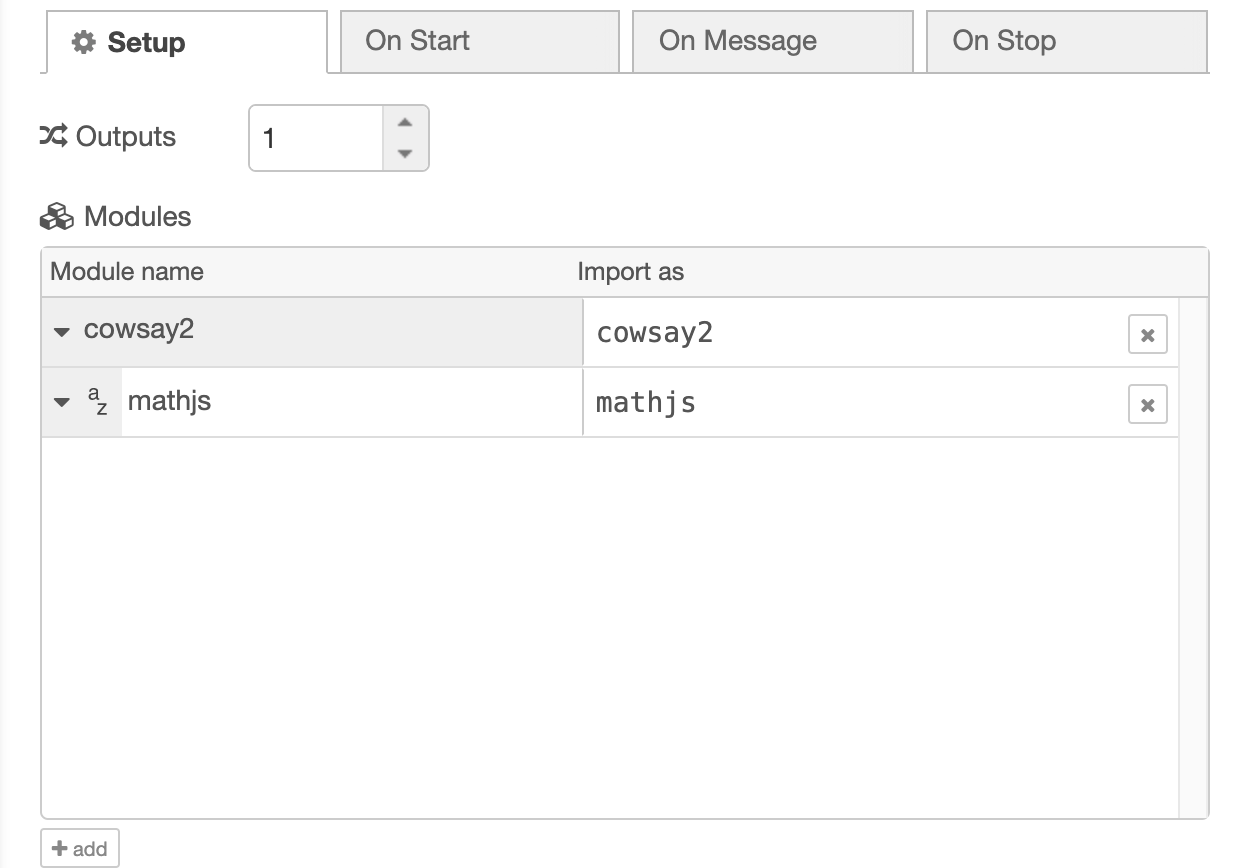 The Inject node has a new button in its edit dialog that will trigger the Inject node with the values from the edit dialog, rather than the values currently deployed. That makes it much easier to quickly inject different values whilst testing a flow.

Note the button in the main flow view will still inject the current deployed values as it always has.

The RBE (Report By Exception) node is one of the hidden gems of the palette. Given how many times its the answer to a question on the forum, it’s clear we needed to make it more discoverable. With this release we have done two things:

Under the covers it still uses the rbe node type, so existing flows will not be affected. Also that means it will still show up if you search for rbe - so users following existing guides will still find it.

Giving it the name filter should help users find it and more instinctively understand what it is for. It also opens up the option of adding more filtering options in the future that wouldn’t have fitted under the ‘RBE’ name.

We have removed node-red-node-tail as a default dependency. This means you may need to manually install that module to get the node back if your flows use it.

One of the benefits of low-code programming with tools like Node-RED, is it abstracts away a lot of the technical detail of how things are working. It allows you to focus on solving the problem at hand.

But just because it’s low-code, that doesn’t mean you can’t have the tools you need to make high quality applications and to help debug when things aren’t going as they should.

To that end, we’re also releasing a pair of new plugins for Node-RED that will bring a step-change to the overall developer experience.

First up is a Flow Debugger. This acts like regular code debuggers, but at the flow level. You can set breakpoints on node ports, either inputs or outputs. Then, whenever a message arrives at a breakpoint, it pauses either at that node, or the entire runtime.

Once paused, it then shows you how many messages are queued up at each point in the flow and in the sidebar you can see the queue of messages in the order they will be processed. From there, you can step each message through the flow, or even delete it mid-flow.

For more information, you can find the plugin page here.

The second plugin we’ve released is the Flow Linter - nrlint. This can be used to identify potential problems in the flow based on a large set of rules the linter provides. For example, it can warn if you have HTTP In nodes that aren’t connected to HTTP Response nodes. Or if you have nodes that are physically overlapping and potentially obscuring each other.

We’ve modelled the linter after eslint which we also bundle in one of the rules that can be used to lint the JavaScript in your Function nodes.

We’ve designed the linter to run in the browser using a Worker thread - meaning it doesn’t impact the performance of the editor. The sidebar shows you the linter results and lets you quickly navigate to the areas of the flow that need attention.

Outside of the editor, nrlint can also be installed and run as a command-line tool against flow json files. This means it can be used to validate flows in build pipelines.

Today we have a minimal set of rules and a recent call for input from the community has generated a long list of great ideas.

We’re sure there will be some slightly more esoteric rules that perhaps don’t belong in the core set. For example, some third party nodes may want to introduce guidance about how their nodes are used. So to support that, the linter rules are pluggable - allowing custom rules to be created and shared with the community via npm.

For more information, you can find the plugin page here.

The release plan we published last year had targeted 2.0 to be released at the end of April and for subsequent milestone releases to happen every 3 months after that. Given we’re already three months beyond that April target, we need to look again at our release planning.

The 2.0 release has been somewhat unique. It’s our first major version bump that has unblocked a number of internal changes as we no longer have to worry about old versions of Node.js. But it has taken longer than expected to sort out those internal changes, including a couple upstream issues that blocked progress for a while.

We really want to get back to a regular release cadence - having a predictable release date that is well known and we all work towards. That’s something we’ll be figuring out as we move forward. But today, we reset the clock and shift our attention to 2.1 that will be released in late October.

If there’s a particular feature you’re interested in seeing in Node-RED, then now is the time to jump into the forum and share your feedback.

As for the 1.x stream, it is now in maintenance mode. That means we will still do maintenance releases as and when needed if there are bugs reported and fixes available.

For the contributors out there, we’ll be shuffling around our code branches in github to reflect the different streams we now have - we’ll share more details via the #core-dev channel in slack, so do come say hello if you’re interested.